Vanderbilt Tops the Leaderboard After Day One 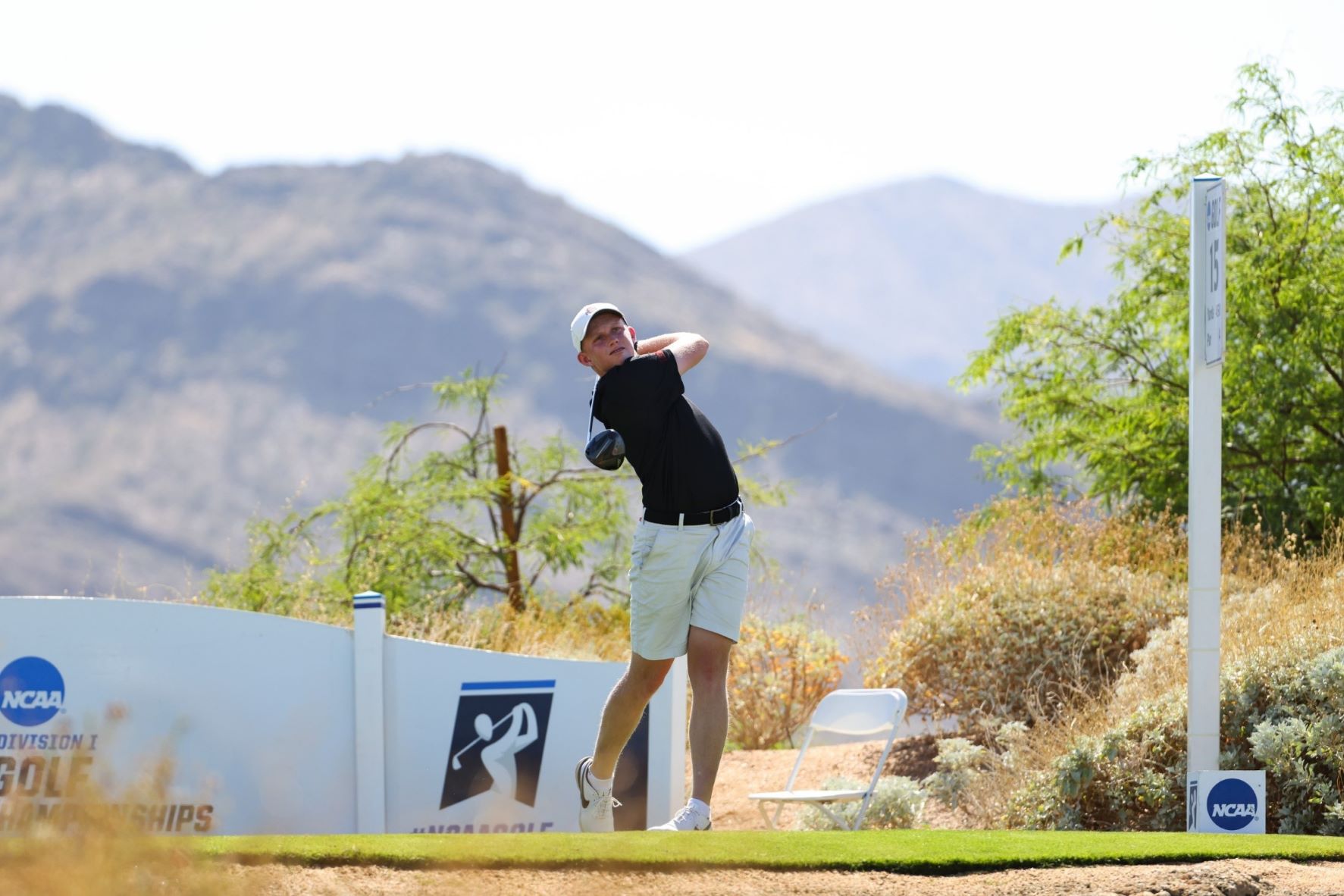 Through 18 holes and triple-digit temps, Vanderbilt leads the 30-team field at the NCAA Men’s Golf Championships. The Commodores, who teed off late Friday morning, teamed up for a 2-over 282, three strokes ahead of second-place Oregon and Auburn. Gordon Sargent, Cole Sherwood and William Moll each shot an even-70 and sit two strokes behind the leaders in individual play.

Kansas’ Harry Hillier and Auburn’s Brendan Valdes turned in scorecards of 2-under 68, which currently leads the field of 136 golfers after the first 18.

“(Brendan) Valdes played great,” Auburn head coach Nick Clinard said. “He’s such a talented kid and great athlete. Chris (Williams) has done such a nice job with him, walking with him and coaching him up. Brendan’s certainly playing some of the best golf of his career, and I think the sky’s the limit.”

Oregon (+5), Auburn (+5), Kansas (+6) and Arizona (+6) authored some gritty performances in the morning wave that would hold throughout the afternoon to keep each school within the top-5. 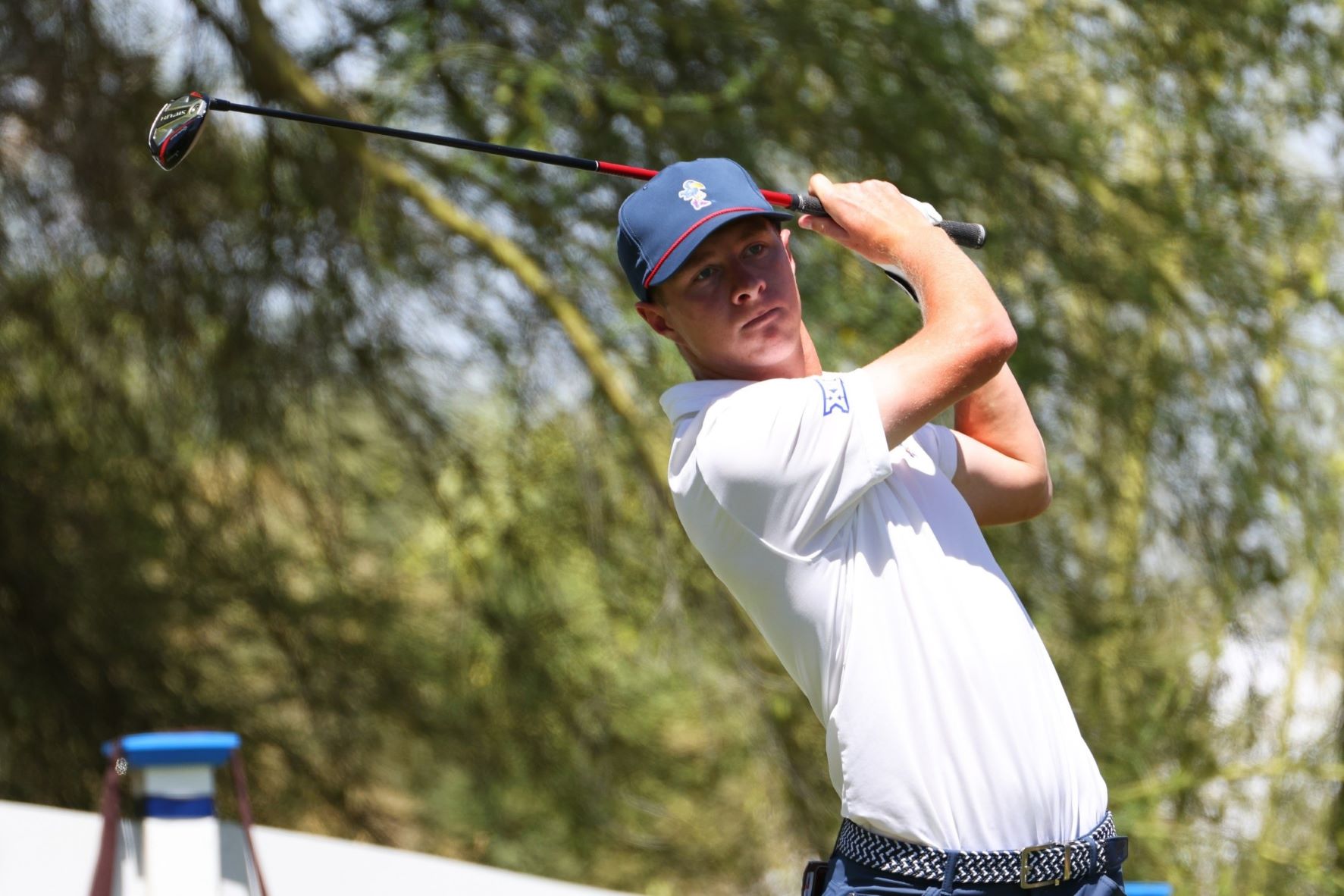 Of the top 10 teams after Day 1, five teed off before 7 a.m., as playing before the Scottsdale sun settles in has proven to be an advantage.

Hillier teed off at 7:16 a.m. and had already ripped off six birdies by the time he made the turn. Valdes was clean and efficient all morning, save for just a pair of bogeys on holes 9 and 18. Hillier and the Jayhawks have a tournament-best 17 birdies after Friday.

An indication of the difficulties that Grayhawk presents, only seven players carded rounds of sub-70, including Bo Jin of Oklahoma State who helped the Cowboys to the national semifinal match a year ago, though none were able to catch Hillier and Valdes’ 68.

The challenges only broaden as play spills into the afternoon, when teams grapple with tricky course conditions and extreme temperatures.

“We have the morning wave tomorrow and need to take advantage of better conditions,” Texas Tech head coach Greg Sands said. “I think if we play like we’re capable of and use what we learned about the course today that I will shake out the way we need to. Our team just has to keep moving forward. I’ve told the guys to keep grinding all season and they’ve done a great job with that. I expect the same in the morning.”

Florida State is just a stroke removed from cracking the top-10, courtesy of Cole Anderson’s 1-over 71. It marks a personal-best for Anderson of the four rounds he’s played in the NCAA Championship in his career.

Backed by even-70s by Cameron Sisk and David Puig, host Arizona State made a late-afternoon charge up the leaderboards and is currently tied ninth-overall with Liberty after a 290-stroke effort. Sisk crept up the leaderboards after stringing together a pair of birdies and was tied with Hillier and Valdes before a double-bogey on 18.

The Sun Devils, ranked as the No. 4 team in the nation by Golfstat, are coming off a semifinal appearance at the 2021 NCAA Championships. Head coach Matt Thurmond’s group was the only team last year to be under-par through 72 holes.

All four teams from last year’s semifinal – defending-champion Pepperdine, runner-up Oklahoma, Arizona State and Oklahoma State – are back this year and each situated within the top-15.

“We got off to a little bit of a slow start but we’re not that far out of it,” Pepperdine head coach Michael Beard said. “It’s a long week. There were some tough shots where we didn’t quite leave ourselves in the best places around the greens and unfortunately it’s hard to make pars in those spots. But the guys hung in there and we’ll be ready to go tomorrow morning. We’re not too far out of it and it’s only the first round.”

The Commodores, grouped alongside top-ranked Oklahoma and Oklahoma State, are the first to tee off tomorrow morning, with play scheduled to begin at 6:10 a.m. MST.