On the heels of the 2020 tournament cancellation, the NCAA awarded ASU, The Thunderbirds and Grayhawk Golf Club the honor of hosting the 2023 NCAA Division I Men’s and Women’s Golf Championships. College golf’s best now have three ways to get on the “Road to Grayhawk,” 2021-2023, to be televised on Golf Channel.

Tournament hosts honored the 2020 event and celebrated the next two at a special gathering on May 27, 2020 – the day the women’s championship would have concluded as well as the beginning of the men’s competition. The speakers included Chance Cozby, executive director of The Thunderbirds; Missy Farr-Kaye and Matt Thurmond, ASU women’s and men’s head golf coaches; and Gregg Tryhus, president of Grayhawk Development. 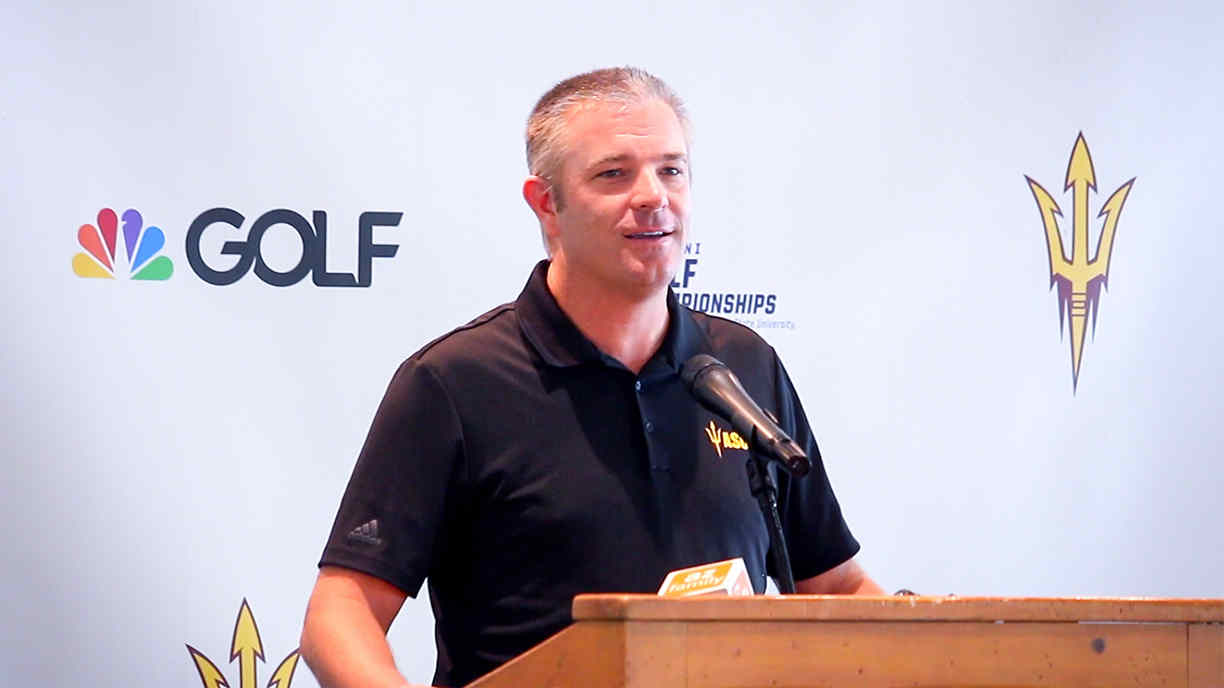 The championship will be contested on Grayhawk Golf Club’s Raptor course, a par-72, 7,090-yard Tom Fazio design that is listed among the “Best Public Golf Courses in Arizona” by Golf Magazine. Since debuting in 1995, Raptor has hosted several premier competitive golf tournaments, including the PGA TOUR’s Frys.com Open (2007-2009). Grayhawk also hosted Pro-Ams for the Waste Management Phoenix Open (1996 to 2012), The Tommy Bahama Challenge (2004 & 2005) and presently hosts the AJGA Thunderbird International Junior since 2000 and PGA Jr. League Championship through 2022.

“We are fortunate to live in one of the most prestigious golf destinations in the country, so what better place to host the NCAA Golf Championships than Scottsdale, Arizona, which annually hosts one of the largest tournaments on the PGA TOUR,” said Vice President for Sun Devil Athletics Ray Anderson. “We are thrilled for the opportunity to host the nation’s elite in our own backyard, and we intend to illustrate why Arizona is the perfect place for the NCAA Golf Championships.”

First Time for Everything

“We are obviously honored to be chosen as the new venue for this prestigious championship,” said Gregg Tryhus, managing partner of Grayhawk Golf Club. “We worked with ASU to submit a bid, and we’re thrilled that it was accepted. Grayhawk has a tradition of hosting competitive tournaments at the highest level. We look forward to holding the NCAA Golf Championship.”

With ASU being the only program in collegiate history to capture the men’s and women’s team titles in the same season (1990), the Devils will have two opportunities to accomplish that feat again with home field advantage.

The Arizona State women’s program just captured an NCAA-best eighth NCAA Championship in 2017.  Also that year, the Sun Devils took the individual title, the Honda Award for golf, and the Pac-12 Golfer of the Year with senior, Monica Vaughn, while being led by the WGCA and Pac-12 Coach of the Year in Missy Farr-Kaye.

“To have the NCAA Championships in the Valley of the Sun is an incredible addition to our community,” said Farr-Kaye. “We have the people, the course and the golf knowledge to stage two incredible years of championships. As the coach of the host school, we look forward to trying to win more championships in front of our incredible alumni and supporters. As a former player who won a title, I can tell you there will be no better experience than a Phoenix crowd watching and encouraging all the teams.”

“The commitment it takes in vision, resources, and time to host NCAA Championships is massive and I can’t thank Grayhawk and Ray Anderson enough for being willing to host it,” said Matt Thurmond, head coach of the ASU Men’s Golf. “This shows the incredible support for our golf programs by our athletics department and this community. Our state takes incredible pride in its golf history and tradition and this will be an amazing addition to the local sports calendar. The NCAA Championships has become one of the premier golf tournaments and I’m beyond thrilled that it will be held here in the desert. I’m confident hosting it here will take the championships to yet another level of success and prestige.”