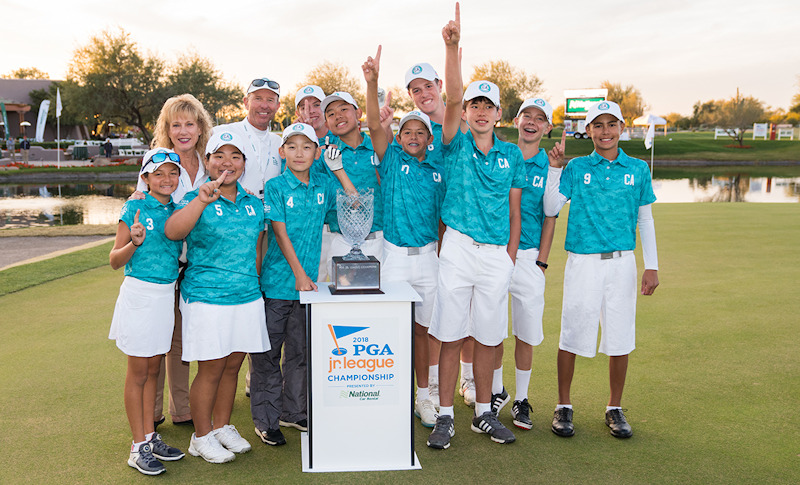 Reported by Hayley Wilson and Michael Abramowitz.
Photos by Darren Carroll/PGA of America

California’s Zander Grant, 13, of Rancho Santa Margarita, California, drained a downhill 5 ½-foot putt on Hole No. 9, to clinch the national title over Team Minnesota (Blaine – TPC Twin Cities) 7 ½ to 4 ½. California finished 6-0 in the Championship and Minnesota posted an impressive 5-1-0 clip in its first Championship.

“It felt great,” said Grant. “It was a little scary, because it was straight downhill and sliding to the right. But it felt good, just like the putt I made on Hole No. 6 to win the flag.”

Back in the Winners Circle

This is a familiar feeling for Team California (6-0-0) Captain John Mason, PGA, and Coach Jackie DeWald-Mason. They previously led their team to victory at the 2015 Championship at Disney’s Palm Course in Lake Buena Vista, Florida.

“We’ve gotten better and better each month, and this is the culmination of it all,” said Mason. “We’ve been looking forward to this for a long time. And, what a great team Minnesota was.”

The highlight of the match came early when Minnesota’s Cash Dragich, 14, of Blaine, made a remarkable chip off the side of a hill from 80-feet out. The ball rolled along the ridge and into the cup for an eye-popping eagle. California answered the bell with a remarkable 30-foot eagle of their own by Ryan Abuan, 14, of Temecula.

California took control with a 5-3 lead after six holes, needing only a point and a half to clinch. They would move the score to 6-4, before Darren Ho, of San Diego, hit a 130-foot approach shot to 5 ½ feet to set up Grant’s glory.

“That was the dagger,” said Mason. “That was what won it right there.”

The team went into celebration mode, as the customary water bottle shower turned into a race to stay dry down the 18th fairway, as the sun set along the McDowell Mountains.

“This win means everything,” said Tsuru, 13. “My brother played in 2015, and I wanted to be like him and win. I’m pretty excited to bring the news back to San Diego.”

In the third place match, Team Texas (Montgomery) edged Team Louisiana (Shreveport) 8 ½ to 3 ½. The two-time Championship competitors attributed much of their success this weekend to their chemistry as a team.

“Between Ben [Willman, PGA, Captain] and I, we had a lineup set last night,” said Texas Coach EJ Kim, PGA. “We completely [called an] audible on it. We said the chemistry has been great, so were just going to go with what we had this morning, and let the kids have fun.”

Team Minnesota, deemed tournament underdogs from the start, battled their way to the top of the Wanamaker Division with a clean 5-0 record in Divisional Play. It was their grit and determination that earned them a spot in the Championship round Monday afternoon. Though they clinched their Championship berth the day before, Minnesota added another win to their belt Monday morning, defeating defending champion Team Georgia 6 ½ to 5 ½.

“We’re really proud of them all,” said Minnesota Captain Jay Norman, PGA. “They played outstanding all week… We’re rookies, so we live and learn.”

Despite coming up short, Minnesota relished the experience.

“This has been amazing,” said Minnesota’s Kathryn VanArragon, 13. “We didn’t know what to expect coming here, it was our first time. It was absolutely incredible.”

On the final day of play, there was a hole-in-one by Team Virginia’s Rylan Shim, 13, who aced the picturesque, 118-yard Par-3 Hole No. 8 with a pitching wedge.

In the morning matchup against Team Delaware that Texas won 8 ½ to 3 ½, Texas’ Finn Burkholder holed out from 140 yards for an eagle.

“I didn’t see it go in, because I’m not tall enough,” said Burkholder. “Everyone went crazy. I didn’t know it went in, but I put my hands up thinking it did.”

While the Woolsey and Camp Fires have not directly impacted the team, Mason remarked during the week that a win could be a shining light in the dark.

“If we can give them something to cheer about and feel good about, it always helps.”